Desperate Romantics, Then and Now [UPDATED] 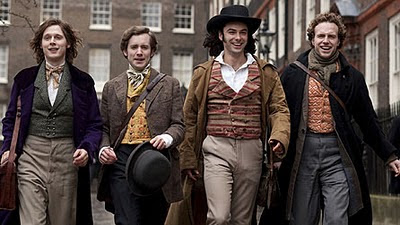 I am just finishing a new book about the lives of the artists associated with the Pre-Raphaelite Brotherhood, Desperate Romantics, which also spawned a sex-saturated (and rather entertaining) BBC miniseries of fluctuating historical accuracy last year (a still from the series is above).  In my doctoral dissertation, which was about the use of music symbolism in Victorian culture to denote spiritual conversion, I analyzed some Pre-Raphaelite canvasses, but, for the most part,  my research did not require me to delve into the less-savory aspects of the artists' lives.  This book has taken care of that gap in my research, and I now know more about the sodden and depressing love affairs of these men, who started out in the world with such high hopes and such noble purpose, than I ever really wanted to.

One of the saddest threads in the book is the story of the open marriage between the great designer and second-generation Pre-Raphaelite William Morris and his wife, Jane, with whom Pre-Raphaelite gadfly Dante Gabriel Rossetti was also in love, and with whom he lived in a house rented by Morris for that purpose.  Everything, however, ended badly and sadly for everyone, and one can't help but feel terrible pity for all the players in the drama, especially those who, like Rossetti, strayed from the Brotherhood's original aim -- to bring a new social realism to art, and especially to religious art -- and began to put beauty for its own sake above all else, a privileging which surely led to Rossetti's mental deterioration and untimely death.

Then I was alerted by my friend Mrs. Darwin to this slice of modern life, which rang achingly true to what I'd just been reading in the lives of the PRBs.  The story of this newlywed pair, given prominent place in the Weddings section of the New York Times, begins:

What happens when love comes at the wrong time?

Carol Anne Riddell and John Partilla met in 2006 in a pre-kindergarten classroom. They both had children attending the same Upper West Side school. They also both had spouses.

Part “Brady Bunch” and part “The Scarlet Letter,” their story has played out as fodder for neighborhood gossip. But from their perspective, the drama was as unlikely as it was unstoppable.

The rest of the article reads like a brave attempt written by a sympathetic friend to clear the good names of Ms. Riddell (a reporter) and Mr. Partilla (an advertising executive), who are quick to point out that they did not have an affair while they were still on their first marriages, and that they will spend the rest of their lives trying to bind up the wounds their behavior has inflicted upon their children from those marriages.  The article garnered many, many more comments than usual for a piece in what are essentially the paper's society pages.  While some comments came in the form of well-wishes, a significant number shared the tone of this one:

I actually had nightmares about this article after I read it.  The ethos of personal happiness as the highest good, a goal for which one must go through fire (though that fire destroy everything it touches), and summon all of one's misplaced courage to achieve, is one with which I'm all too familiar from an earlier chapter of my life.  Though my actions, by the grace of God, did not mirror those of the players in what is essentially a story of personal tragedy (one that someone at the Times inexplicably deemed "news that's fit to print"), I can fully understand the compulsions and the lack of compunction and other social barriers that encouraged Ms. Riddell and Mr. Partilla to blow up their own lives and the lives of all those dear to them.

One thing in the article that struck me as overwhelmingly sad is the theme of the inevitable messiness of life, "messiness" being a sort of unstoppable force that one is advised to accept and embrace, and which rationalizes the suffering of the innocents on the outskirts of the love story:


“This is life,” said the bride, embracing the messiness of the moment along with her bridegroom. “This is how it goes.”

I'm quite familiar with this ethos of messiness; it used to come at me from all sides, and it's larded throughout our culture, and trotted out with alarming frequency to justify a great deal of harmful behavior.  Another New York Times "Vows" column that caught my eye last year for the same reasons was this one, with the added interest, for me, of both the bride and groom being opera singers, since I associate that messiness-to-personal-happiness equation with my own opera days. (New Yorkers might recall that the couple's "life coach" and minister, Aleta St. James, is the sister of Guardian Angels founder Curtis Sliwa, and became a news item herself a few years ago when she gave birth to twins well into her fifties, apparently via a donor egg.)

It strikes me that those who are working to uphold traditional marriage have far more to fear from the credo of life's inevitable messiness, tied to the goal of personal-happiness-above-all-else, than from any other quarter.

UPDATE 2:  A well-written analysis by someone who's been there, which also references one of my favorite movies, The Squid and the Whale.
Posted by Pentimento at 8:39 AM

Pentimento--This post touches on so many areas concerning which I could launch out into personal anecdotes; but I'm not gunna dooit. Wouldn't be prudent.
I will say, however, without providing any details, that adopting a strict austerity of lifestyle, in conscious opposition to life's supposedly inherent "messiness," will not necessarily bring one any understanding, much less appreciation or admiration, from others with whom one is involved, at whatever level. Life seems to be a bottomless pit containing an infinite number of dilemmas.
Thanks be to Goodness for the consolations of creativity and art.

Rodak, I agree with you, and the irony is that life *is* messy, and people often have the choice either to do shitty things to others or to sink deeper and deeper into their own misery. The annoying thing, to me, about the Times piece is that the couple are painting themselves as heroes. They did what they did, and probably very few people besides themselves are happy about it; but nonetheless it seems to me that they didn't have to use the mouthpiece of the Gray Lady to try and justify themselves.

2) This is timely as we navigate yet another holiday with all that "messiness."

There's a great exchange in The Three Burials of Melquiades Estrada:

"I don't want to incur damnation," replies the blind man, apparently the sort who fears divine judgement on suicides.

"Neither do we," replies Jones, and rides off.

Oh yes, messy. That's what principle is for.

Betty, having done extensive research in the area of PRB painting, I was annoyed by the first two episodes of "Desperate Romantics," because I was hoping for more of a costume drama, and instead there's a sort of amalgam of historical fact and anachronistic revisionism. But I watched on and was hooked. I think you'll like it.

That's heartbreaking. The message those children are getting isn't, "This is real love", it's "fidelity isn't as important as pleasure.".

I broke an engagement because I Was In Love, and in retrospect I know I did a lot of stupid things, but even at the time I knew that love wasn't some unstoppable force, sweeping me and everyone else in its path. I could have stopped. I could have distanced myself. Pursuing someone else was not heroic, not glorious- it was dishonourable. God brought lots of good out of it, but that never justifies sin.

"God brought lots of good out of it, but that never justifies sin." That is something to ponder, Lissla.

I think that one of the most difficult parts about growing up is realizing that love is not an unstoppable force, and that one must discipline one's passions.

That's an excellent point, Anne-Marie. It's sad to see how insane we've become as a culture, where some sort of emotional "authenticity" becomes the goal above all others. Your comment about being in jail cracked me up, too. :)

Anne-Marie, I've done it again: I've published your comment, and then, when I went back to my email notification, rejected it BY MISTAKE, and now it's gone forever. I do this all the time! I am so sorry. Please re-post it, and I promise not to do it again!

I'm embarrassed to say that I have just found Matthew Lickona's comment from one month ago buried under a pile of something or other. I'm sorry for the late publish, Matthew! I have a lot to learn about this here blogging.