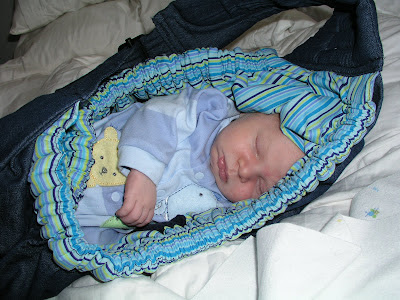 My son will be two years old this week. Everybody tells you that "the time goes so fast,” but it doesn’t seem real until you are looking at a big boy who just a moment ago, or so it seems, was a tiny newborn cradled against your heart. When he was born, I was afraid to revel in him; I always felt as if a Damocles’ sword was hanging over me, as if he’d be taken away by a cruel fate if I dared to fall too deeply in love with him. The days rocking him, holding him, nursing him seemed endless, but in my memory now they seem as if they were just one long day. There is so much I can’t remember.

My prayer for him is the same as any mother’s prayer for her child: that he’ll be happy and healthy, that he will know and love God, and that he will be free from the torment and strife that shaped my own childhood and adulthood. But I also hope that he will love the things that I love, not out of vanity, but because the things that I love, chief among them music and poetry, took the child of torment and strife that I was and helped to fashion me into something more graceful, more giving, and far better able to love what is beautiful in the world.

The French composer Oliver Messiaen wrote a song in 1930 called “La fiancée perdue,” a setting of his own text. The last words are, in translation: “O Jesus, bless her! Her! Give her your powerful grace! That she may know nothing of suffering, of tears! Give her tranquility, Jesus!” In spite of the exclamation points, the music in this final section of a very loud and fast song is extremely calm and restful, and dwindles away into silence. I also pray this for my son.
Posted by Pentimento at 2:16 PM 3 comments:

Love bade me welcome, yet my soul drew back,
Guilty of lust and sin.
But quick-ey'd Love, observing me grow slack
From my first entrance in,
Drew nearer to me, sweetly questioning
If I lack'd anything.

The Womb and the Garden

In the late 1990s, a wealthy and eccentric widow gave me a small scholarship to further my voice training. I took the money and sought out the New York City opera coaches whose auras had the most sheen at the time. I had some interesting experiences, and got lots of advice, all of it different. One Famous Coach told me that if I sang repertoire that was just a little too light for my voice, I'd "work everywhere." Another plied me with martinis and explained his sudden infatuation (of which I was assuredly not the only object) by saying that I was the only soprano he'd ever met (I had not yet made the switch to mezzo-soprano) who could carry on a conversation about something other than her hair and her gowns, and who knew how to pronounce HUAC correctly. When I went to use this Famous Coach's bathroom, I found a Duane Reade bag hastily tossed on the floor with a giant box of Trojans spilling out of it. This same Famous Coach, after my first marriage ended, told me, with perhaps a touch of bitterness, that I had lost my ambition, and that if I didn't get it back, the only thing I'd ever be known for was the guys with whom I'd "hooked up."

But the most interesting of the Famous Coaches was an unusually funny, kind, maternal, self-effacing middle-aged woman. She worked almost exclusively with the breath, trying to tailor the way her clients breathed to the sound, size, and ethos of their voices and musicalities. I wonder what she's doing now; she really was a wonderul person. At that time, she was trying to have a baby, and I hope it happened, as she would have been a wonderful mother.

I worked with her during a terrible time in my life, the year when my first marriage was ending. She knew what was going on, and asked me one day, "Do you want a stack of programs at the end of your life?" "Yes," I said, not really understanding why she thought any singer wouldn't. "Is that ALL you want?" she asked more pointedly. "Ummmm . . . no," I conceded, none too convinced myself. "Then don't f*ck up," was her reply. That was surely the best piece of advice I got during my time of fancy, expensive vocal coaching, and one that I wish I had taken.

She told me something else that has stayed with me: the Hasidim believe that when we are gestating in the womb, we know everything that is going to happen in our lives. But at birth, God lays His hand on our heads, and we forget everything, because if we remembered we couldn't bear it. The mark of this action of God is the soft spot on the newborn's head.

I wonder if, according to the Hasidic legend, the infant in utero is like Adam just after he's eaten the fruit, before being rebuked by God; and if the newborn baby is like Adam after the fall.
Posted by Pentimento at 12:14 PM 9 comments: 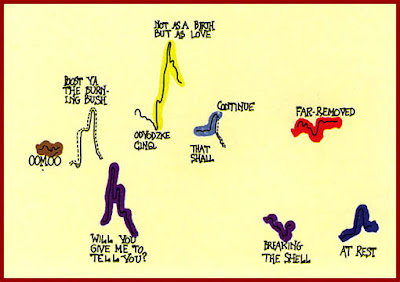 It's the end of what feels like a never-ending semester, and the other day, the student for whom I designed a grant-funded tutorial on extended vocal techniques performed John Cage's "Aria" before the university music department's diversity committee (the committee had funded my grant in the hope of attracting more minority students into academic music studies). I had been worried about how all of this would turn out; how does a nineteen-year-old black girl from Canarsie convincingly interpret what is now a rather stilted, static, and dated piece by perhaps the whitest of American composers? Well, my fears were laid to rest, because S. did an amazing job. Cage notated his score with colors and lines, asking the performer to devise a lexicon of vocal sounds, styles, and techniques to correspond with each color. The singer for whom he wrote the piece, Cathy Berberian, had designated styles like "folk," "Oriental," and "Marlene Dietrich" in the first performance in the late 1950s. S. reinterpreted the color notation, using what she had conceived as the voices of black Brooklynese, !Kung-style tongue-clicks, black female prophecy, and Pygmy growls, among others. She was wildly creative and subtle, and appeared before the committee in jeans, bare feet, and a white t-shirt emblazoned with one of Cage's notations from the score, a red squiggle set to the words "In Armonia." In spite of my doubts about the diversity committee's aims, I hope that S. will go into academic music studies. She was really impressive.

In a funny way, her performance also restored my faith in New York City for a brief moment; it seems to me that a talent like hers could only be the product of the strange nurturing of this fragmented metropolis.
Posted by Pentimento at 4:13 PM No comments:

Things I had forgotten about Mister Rogers’ Neighborhood:

The music is excellent. The opening musical statement, the intro to “It’s a Beautiful Day in the Neighborhood,” which plays as the camera pans over the model town and the trolley rolls by, could be the lead-in to a Coltrane tune played on the electric piano.

The show is suffused with an autumnal melancholy. Watching it now makes me feel like a kind of Holden Caulfield, longing to protect the gentle world that Mister Rogers and his cast so lovingly created – a world that seems much, much further away now than it did when I first saw the program as a child, and not just because that was in the distant past. Am I wrong, or is the world meaner now? Sometimes it’s almost too much to bear to think that Mister Rogers’s young viewers will soon venture out into this fallen world, and perhaps fall themselves, as many doubtless have.
Posted by Pentimento at 7:26 AM No comments: