A Poem About Brahms 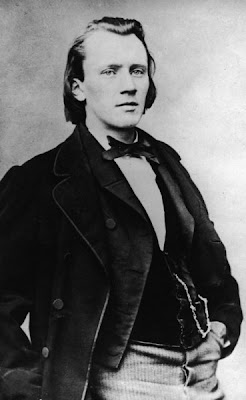 I was thrilled to read this poem today at The Writer's Almanac. Whether or not Brahms and Clara Schumann had a sexual relationship has been speculated about for many years -- it is undeniable that they loved each other profoundly -- but, although they burned most of their correspondence, the evidence is against it. Brahms biographer Jan Swafford has suggested that, after the death of Robert Schumann in an insane asylum in 1856, the younger composer had the opportunity to propose marriage to Clara, but instead left her disappointed. The two remained friends, and Clara, one of the greatest pianists of her age, premiered many of Brahms's works.

The Intermezzi mentioned by Lisel Mueller are opp. 117, 118, 119. Brahms called the three op. 117 pieces, which he wrote while Clara was in her final illness, "cradle-songs of my sorrows." Here is the great German pianist Wilhelm Kempff playing op. 117, no. 1, with beautiful directness and simplicity. The piece was inspired by the text of a Scottish poem, "Lady Anne Bothwell's Lament," and Brahms inscribed in the score an excerpt from the poem in Herder's German translation. The English words are:

And here is the poem about Brahms.

Johannes Brahms and Clara Schumann
The modern biographers worry
"how far it went," their tender friendship.
They wonder just what it means
when he writes he thinks of her constantly,
his guardian angel, beloved friend.
The modern biographers ask
the rude, irrelevant question
of our age, as if the event
of two bodies meshing together
establishes the degree of love,
forgetting how softly Eros walked
in the nineteenth century, how a hand
held overlong or a gaze anchored
in someone's eyes could unseat a heart,
and nuances of address, not known
in our egalitarian language
could make the redolent air
tremble and shimmer with the heat
of possibility. Each time I hear
the Intermezzi, sad
and lavish in their tenderness,
I imagine the two of them
sitting in a garden
among late-blooming roses
and dark cascades of leaves,
letting the landscape speak for them,
leaving nothing to overhear.

One of my son's "special interests" (as the autism/Asperger's people say) is the waterways of eastern North America. He has about two dozen books about the Hudson River, the Saint Lawrence Waterway, and the Erie Canal; he loves the classic Paddle-to-the-Sea; and he spends a lot of time drawing maps of the Great Lakes and the cities that are built on their shores.  As a reward for good behavior, I recently got him a collection of DVDs called "On the Waterways," which was apparently a PBS series in the 1990s, and is narrated by Jason Robards. The episode about the Mississippi, predictably enough, uses a clip of Paul Robeson singing "Ol' Man River" from the great musical Show Boat, which, in the show, is sung by the dockworker Joe, and includes the lyrics:

My son turned to me one night after watching this and remarked sadly, "I don't like being black."  He elaborated, "I don't like having doors closed in my face because I'm black."

This interested me, since my son is white. It may have interested me even more because my grandmother and mother were committed to the cause of civil rights. What does being black mean to a white boy? Is blackness its own essential suchness? Is it a state defined through self-recognition, or is it a condition demarcated, even imposed, by society? (Interestingly, Show Boat raises some of these same questions.) And why does my son, who is not black, believe that he is?

I am convinced it's because he is starting to perceive himself as different from, as other than, and as outside of. And the most prominent and notable class of people who, in our culture, have been those things has historically been black.

Below is a clip of John Lennon and Yoko Ono on the Dick Cavett show, with Lennon explaining the genesis of his controversial song "Woman is the N*gger of the World," and Yoko thumping arrhythmically on a tambourine. Lennon quotes a statement by California congressman Ron Dellums suggesting that, owing to their alienation and figurative disenfranchisement, "most of the people in America are n*ggers." Perhaps this is the real meaning of my son's self-perception of blackness.

Posted by Pentimento at 12:59 PM No comments:

Mamas, Don't Let Your Babies Grow Up to be Opera Singers

I've been scarce here lately for more than the usual reasons. In fact, I spent April doing something I never thought I'd do again in this life: rehearsing and performing a small principal role in a Mozart opera with a reputable regional opera company. To make a long story short, the music director of company in question, which is about seventy-five miles from where I live, called me when the singer who was originally cast was offered a more career-making sort of role with a different company, creating a scheduling conflict. I didn't know this conductor personally, but another conductor had recommended me. I demurred at first, because it just seemed crazy. I'm not in the game anymore, and it really wasn't the kind of role I would sing if I were; it's usually cast with an up-and-coming singer, whereas I am more of a down-and-outing one. I explained to the conductor that I don't do opera anymore, that I have children, and that it would be very difficult for me to make rehearsals because of the distance. I also told him that I could recommend two excellent colleagues who had sung the role. But it seems the referring conductor's recommendation counted for a lot, and in the end I was offered the job, and, after my initial protestations, I figured I should take it, because . . . . well, I'm not sure why. I had been strongly prevailed upon; the money was good; and it was the chance to sing in a Mozart opera. And I had been told that I would only have to make it to three rehearsals, which turned out not to be true. I think I had to make the trip back and forth from my home to the city where the opera company is located twelve or thirteen times, and as a result I had to make some creative child care arrangements, and I spent most of the month more sleep-deprived than usual, since I was getting home well past midnight and my children wake up well before six a.m.

During the production process, I felt like an undercover anthropologist. After so many years away, I was overwhelmed by how vastly different my life was from the lives of my colleagues in the show, and, indeed, how different my life is now from the way it used to be when I was pursuing an opera career. I didn't have the chance to get close to any of my colleagues, because they were all in residence at a hotel for a month, while I was driving back and forth, so I missed out on some of the best things about being an opera singer: the camaraderie, the jokes, and the friendships that form in the inevitable Canterbury-Tales/Gilligan's-Island-type scenarios that arise when strange singers find themselves together in a strange city (incidentally, there's a wonderful novel on this topic, Now Playing at Canterbury by Vance Bourjaily). My colleagues were uniformly the best singers I've ever worked with; out of the cast of nine, three had already sung at the Met, underscoring the current dire economic climate for opera, in which, because of multiple regional-opera-house closings, A-level singers are working in C-level houses, which is both a boon to those houses and a disaster for singers less-well established.

None of the other female principals was married. Only one besides me had children: a three-year-old, whom she'd brought along on the gig, and who was being cared for by babysitters in the hotel room. "I don't know how much longer I can keep doing this," the singer-mother confided in me. Two of the male principals did have children, but they also had wives to care for them back home while they were out on the road. I overheard one of the unmarried, childless female principals ask one of her male colleagues, upon learning that he was going to New York to see his wife on our day off: "Can I live vicariously through your sex life? Because it's going to be a lot better than mine, no matter what."

I'm sure I've mentioned this here before: you can't really be a mother and an actively-careerist opera singer. Well, you can, if you time your childbearing perfectly, and if you're commanding fees that allow you to pay for nannies, two conditions which almost never happen singly, let alone simultaneously. Some haters who used to read this blog a few years ago left comments suggesting that I quit opera because I lacked talent. While I don't think that's entirely true, it doesn't really matter that much, because once you get to a certain level of the profession, it's not even about talent. I'd like to say that it's about hard work, and that's certainly part of it; but it's much, much more about a confluence of things that are out of the singer's control, including the stars aligning. And of course, you have to really want it.

One of the principal singers in my production -- one of the unmarried women who had sung at the Met -- is enrolled in a doctoral program in voice at a prestigious conservatory. Since I loved my own years of doctoral study, I was surprised, when I asked her how she liked it, to hear her say that it was a total waste of time, but that she needed the piece of paper to get a good teaching job. I realized that our reasons for getting our doctorates were very different: I had already transitioned out of opera when I enrolled, and was performing concerts of material I'd found in my own archival research, and I wanted to learn how to be a better researcher. She, on the other hand, is coming up against a wall in the business beyond which, since she's a lyric-coloratura soprano approaching forty, she cannot go, and she does not have a husband, and she realizes that she needs to make a career transition in order to continue to eat.

It is an unhappy profession, peopled by lonely, unhappy people.

When I told a friend, a Wagnerian soprano who left the career in order to have a family, about my recent experience, she wrote me:

I can't even imagine trying to go sing with the diva girlies now. I really think opera is a dying sport/art form, so it is probably worse now than it was when we were out there.

The best colleagues I ever sang with were Wagnerians, since they are too busy trying to get all their shit together to be prima donnas . . . and I generally found that they want you to know the stuff so that if they stumble, someone can help!

I think I acquitted myself without shame, and I'm glad it's over.