Blessed Cecilia, Appear in Visions to All Musicians, Appear and Inspire 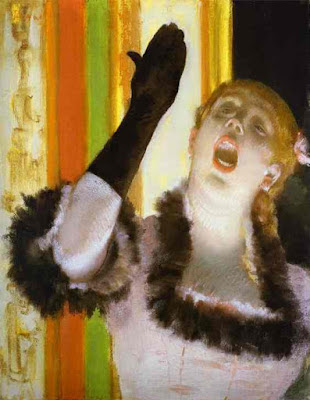 Many years ago, I dropped temporarily out of college so that I could do something really important, which at that time, so I thought, was performing in off-off-Broadway experimental theater. Along with a close friend, I fell in with a group of Bohemian-living dancers and actors. That I could sing made me cast-able in whatever obscure, abstruse, or opaque – usually all three – spectacle was undertaken. I performed at some well-known venues for this sort of thing, and once got a good review in the Village Voice, but my friendships with this group ended in an unexpected conflagration, and I eventually made my way back to classical singing. Part of this was the influence of the man who would become my first husband. An artist himself, he prodded me to do what I could really do well. So I threw myself into my craft, partly to earn his respect, and partly because, as one of my former Bohemian friends had put it, singing was the only thing I had, and I ought to cultivate it no matter what the circumstances.

Now, many years later, I am about to give my doctoral dissertation recital tomorrow night (which is the reason I haven’t posted much lately). I’m having the feeling of seeing my life as an artist pass before my eyes right now, and I will write more about the recital after it’s over. One thing that makes me glad is that I’m beginning with Beethoven’s great song “Adelaide,” which I started singing when my son was a tiny baby. He knows the song quite well by now, for a two-year-old, and often asks to hear it (he calls it “Aïda”), even filling in the German words at the ends of phrases in his happy loud voice.

Those of you who read this, please say a little prayer tomorrow night that my work will be pleasing both to God and to the adjudicating committee.
Posted by Pentimento at 9:10 PM 3 comments:

Happy birthday, Christopher Smart.
Posted by Pentimento at 7:49 AM 1 comment:

The Artist in Exile I've reached the stage of life in which I find myself, along with many of the friends of my youth, feeling as though I've left the world of familiar things behind. For me, as for them, the formative years were spent simmering in a heady stew of ambition and art which was hardly tempered by the relative difficulty of our circumstances (Soprannie once had to beg for change to get the subway home from her temp job). It's not much of an exaggeration to say that in my youth and young adulthood I lived for beauty, and spent most of my waking hours trying to figure out how I might, given my own particular situation, best be able to reveal it (not create it, because, as a singer, I was an interpretive artist, not a creative one; and perhaps all creation is really the prerogative of God). I lived for the transcendent experience, which did not exactly help my relationships with those around me. I can't imagine how awful I must have been to live with. At the time, however, I thought art excused everything.

For our third wedding anniversary earlier this week, I gave my husband the DVD of Babette's Feast, which we had gotten out of the library and watched a few months ago. I will never tire of this movie. I first saw it in the early 1990s with my voice teacher of the period (a very influential person in my life who has since become an Alexander technique teacher; more about this in another post). Many commentators have noted the film's Catholic and eucharistic themes, but it is also very much a movie about what it means to be an artist.

Babette has had to leave the world of the familiar as a political refugee; indeed, her husband and son have been killed in the French Revolution of 1871. She ends up on the cold, stark, forbidding shores of Jutland, Denmark, as the cook and housekeeper to two pious Calvinist sisters. But it is not revealed until the end of the film that she has also left behind the glittering world in which she was a celebrated artist who practiced her art freely. This sense of personal and artistic exile is something that my friends and I, trained in music and now practicing it less and less as we take on more and more of the responsibilities of family life, are familiar with, and there is a sense of loss as we give up more and more of our art. I, as a lowly adjunct lecturer at a large urban university, teaching one of my department's 27 sections of Music 101, am luckier than many of my friends; I have a socially-approved means of making the transition from being an artist to being something else. Becoming a teacher, in the eyes of the world, seems like a logical step in the life of a semi-obscure musician, while becoming a mother seems like a severe derailment.

Philippa, the sister in Babette's Feast who had once considered a life on the opera stage, tells Babette something beautiful: that in heaven, she will be the artist God has meant her to be. I pray that my friends and I will find a way to understand our own lives in light of this blessing, even if becoming the artists we feel we were meant to be eludes us in this life.
Posted by Pentimento at 1:00 PM 3 comments:

A Folle Journée in the Life 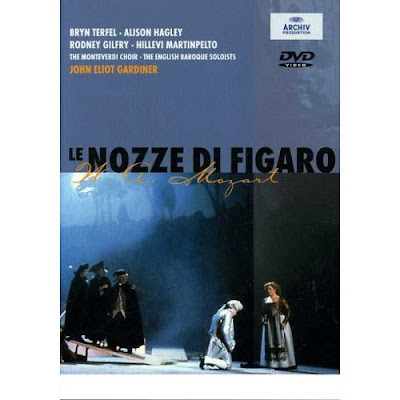 We finished our section on Le Nozze di Figaro today in Music 101. There were some wonderful things in the production we watched on DVD, a live performance given in 1993 at the Theatre du Chatelet in Paris, with John Eliot Gardiner conducting (the DVD is pictured above). I particularly loved the moment during "Pace, pace, mio dolce tesoro," the beginning of the Act IV Finale, in which Figaro confesses to Susanna that he knew her by her voice (a lovely conceit itself): Alison Hagley, as Susanna, sings "La mia voce?" ["My voice?"] in the smallest, sweetest pianissimo, giving the sense that Susanna is not only surprised, but touched, even overwhelmed, by the love Figaro has for her on their wedding night, at the close of a day of total madness, doubt, confusion and deceit.

My formerly ultra-Orthodox Jewish student suggested that Figaro was biblical. He related the exchanging of identities between the Countess and Susanna to Leah being exchanged for Rachel on Jacob's wedding day; the Count forcing Cherubino into the army to David sending Uriah, Bathsheba's husband, to the frontlines to be killed; and the moment in Act IV when the Count, thinking his wife to be his maid, gives her a ring as a token of his affection to the Genesis account of Judah and Tamar. I can't say I agree, but I found the notion intriguing.

In other Figaro news, I was suprised the other day to find my office-mate talking with a baritone whom she'd engaged to substitute-teach one of her voice classes. I recognized him as the Figaro from the long-ago production in which I sang with my good friend Soprannie. He didn't recognize me, I have a different last name now, and I was too shy to mention those far-off days, so we met one another as two anonymous voice-teaching adjuncts at a big public university.
Posted by Pentimento at 10:31 PM 7 comments: