The Consolation of Music 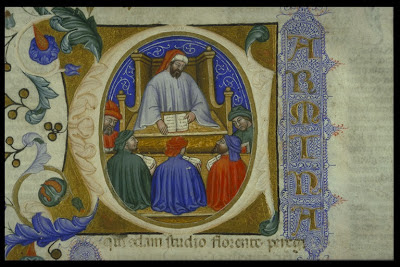 My semester begins next week, and I'll be teaching my writing class for music majors again, as well Introduction to Music, a 101-level class. My department offers twenty sections of Music 101, all of them taught by adjuncts; teaching 101 is a necessary rite of passage for anyone aspiring to the tenure track. As I prepare my syllabus, however, I feel daunted and overwhelmed. I've never taught a survey course to non-majors, and I wonder if I'll ever be able to find the right language to introduce Western classical music to students for whom it will be completely new. How do I explain to them how important the standard repertoire is to the soul and conscience of late-modern humanity, as I believe it is? How does one "eff" the ineffable? Those of us who work in and with music are, I think, incredibly fortunate: we hold a small but powerfully-honed tool that is capable of extending the consolation of beauty into an often bleak world. I hope with all my heart that, in some tiny way, I will be able to do this for my students this semester. I'll certainly be calling on all the musical saints for help.
Posted by Pentimento at 11:35 PM 6 comments:

The Voices That Have Gone, Part 7 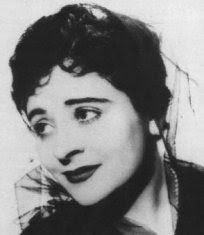 My husband likes to listen to the 1957 Sir Thomas Beecham recording of La Bohème, not because he’s a connoisseur, but because it’s the one we have (I used to also have the von Karajan recording with the luminous young Pavarotti and Mirella Freni, but I gave it to my ex-husband years ago and haven’t had the heart to replace it). The Beecham recording features Victoria de los Angeles (above) as Mimì, Jussi Bjoerling as Rodolfo, Robert Merrill as Marcello (my favorite character in this opera), and Lucine Amara as Musetta. Sometimes it’s almost too much for me to hear these wonderful singers, all dead except Amara. No one sings like that anymore: the plangent, conversational, extremely feminine singing of de los Angeles is sui generis, as are Bjoerling's passionate yet slightly restrained Italianate style and Merrill’s combination of wit, warmth, and virility. The deaths of singers in the past year and a half have hit me very hard: Pavarotti, Beverly Sills, Jerry Hadley, and especially Lorraine Hunt Lieberson, whom many a sensitive young mezzo idolized fiercely for her depth of soul and her fragile humanity. But then again, sometimes I can’t even stand the thought that Beethoven is dead. I heard a recording yesterday of Yo-Yo Ma and Emmanual Ax playing his Variations on “Bei Männern, welche Liebe fühlen” from The Magic Flute (WoO 46), and it struck me as the most perfect music ever written; and I longed for those days in Vienna at the turn of the nineteenth century, when, at least in my imagination, the soul was less fettered and there was a lot more great music around to ease the pain of life.
Posted by Pentimento at 10:56 AM 2 comments: 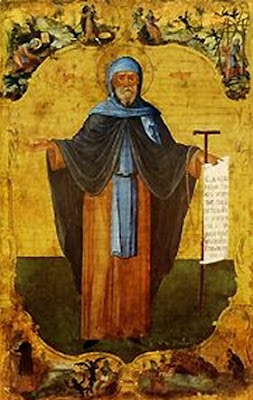 "If the soul does not free itself by way of the cross it can never be free. It is the tremendous surgical operation which the Father himself carries out on the flesh of his son in order to save him. And it is a dogma of faith that without the cross 'there is no forgiveness.' A mystery, but it is so. Pain purifies love. It makes it true, real, pure. And in addition it gets rid of what is not really love. It frees love from pleasure which falsifies it like a mask. It makes it a gift freely given.

When the flood of pain has passed over the soul, what remains alive can be considered genuine. Certainly not much remains. Often it is reduced to a thin shrub. But on this the dove of the Holy Spirit may rest to pour out his grace. It is reduced to 'yes' murmured among tears and anguish, but echoed by the all-powerful 'yes' of the dying Jesus; it is reduced to a child who has ceased to argue with God and men, but is helped on by the kiss of the Father."

--Carlo Carretto, Letters from the Desert
Posted by Pentimento at 8:30 PM 2 comments: 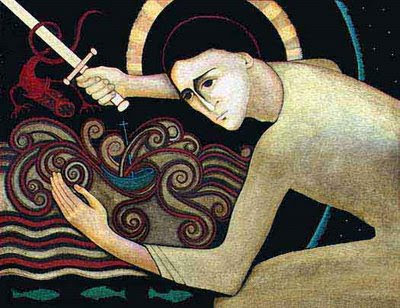 I signed up recently to get the e-newsletter of Canadian Catholic artist and writer Michael D. O’Brien. I have not yet read any of his novels, but have a couple of them on request through the public library. They seem to be popular; although I made my request a few weeks ago, they still haven’t arrived at my library branch. What interested me in O’Brien is the fact that two of his novels feature as their hero the fictional Fr. Elijah Schäfer, a Jewish convert to Catholicism and a Carmelite priest. As some of my readers know, the current focus of my scholarly work is the association between music and conversion, and I have a special interest in conversion stories (interestingly, the Carmelite path is one that has traditionally brought Jewish converts into the Church, the most famous examples in our time being Saint Teresa Benedicta of the Cross, who was martyred, along with her sister Rosa – also become a Carmelite nun – at Auschwitz. Carmelite saints Teresa of Avila and John of the Cross were also of Jewish extraction, though it was their parents who converted). O’Brien is also a wonderful icon painter who incorporates native Canadian techniques and iconography into his work.

His monthly newsletter arrived in my inbox this morning, and it was astonishing. He writes about the culture of moral relativism (i.e. the culture of death) in a fresh, illuminating way that transcends the defensiveness and partisan bitterness I’ve come to expect from American conservative Catholics, who sometimes have a bunker mentality when it comes to accommodation with the current state of things. One of the hardest things for me to accept in the wake of my own conversion from being a semi-glamorous and entirely selfish single New York singer is that the values I once held, while in keeping with this state of things, are antithetical to the way of life I now attempt to espouse. I often console myself for this by telling myself that the conservative Catholics around me are anti-intellectual Philistines who can’t possibly understand how important my life and work are (until I remember that arrogance and pride are among the defects I must work the hardest to conquer).

Reading O’Brien’s newsletter, however, has made me understand why my old values and lifestyle are not in keeping with the new life I stive for. “The economy,” he writes, “continues to inflate according to the now dominant model of family income: The majority of households in my country [Canada, though it might as well be the United States] are double-wage families with two or less children. The cost of housing, food prices, clothing, in fact the cost of almost everything, rises and rises. Contraception, sterilization, and abortion are the foundation stones of this economy [italics added]. So, too, is greed-profiteering, avaricious forms of speculation, and that old thing condemned by God... Usury. Yes, unfair interest, the backbone of our economy. . . . Those who do not play by those deadly rules have many crosses to bear. These extra crosses are due to the sins and blindness of others. Too often, a conscious or subconscious rationalism has infected the thinking of contemporary man, even men of good will, and one could go so far as to say many a churchman as well. In their assessments of what is 'reasonable' and possible for marriage in our times they have minimalized, or dismissed altogether, the factors of grace and the transforming power of sacrificial love. It's a temptation to get bitter about it. But we mustn't. The Cross is always unfair. Jesus's cross was the biggest unfairness of all time. But he bore it like a lamb and he turned it into a sign that confounded every device of the enemy. “

O’Brien goes on to exhort his readers to “do the impossible. Let us indeed do what rationalists cannot understand, that is, let us do the supra-rational thing, the eternal thing incarnated into the present moment. I mean, begin to praise and thank God for each and every one of the trials he permits in your life. Then watch what He does. He works everything to the good for those who love him. Don't give up, keep on praising and thanking, and locked gates will open, unhealable wounds will heal, the kremlin walls of hopeless situations will crack and let in light. One crack at a time, one brick falling at a time, one victory at a time. One step at a time and only enough manna for one day at a time, just as it was for our forefathers in the desert. . . . in this way we will advance in the Great School of the Soul that is married life and family. For none of us will it be easy. In taking our first tentative steps of radical trust, we will grow stronger, and I think wiser, and then our strides will become longer and more sure. Trust grows the more we practice trusting. And with it love grows, and in the process the unexpected occurs, the ‘impossible’ in the midst of the glorious ‘ordinary.’”

Inspiring words, and strangely timed to coincide with similar advice I received yesterday. I had gone to the church in the garment district in whose thrift shop I bought my beautiful wedding dress (which I’ll blog about later), where I hadn’t been in almost three years. It’s a rather decrepit old church, which I suspect is on the archdiocese’s list to close, but it’s beautiful inside, filled with icons and lit with dozens and dozens of real candles. I got onto the confession line, and when it was my turn, was astonished to receive a simple instruction that was nonetheless radical and transformative. As some of my readers know, I experienced both an ectopic pregnancy and a miscarriage in the past year, and a priest in my parish told me that God might be chastising me for the past sin of abortion committed seventeen years ago, for which I’ve long since been absolved. When I asked him how such chastisement could be squared with God’s promise to Jeremiah to “forgive their sins and remember them no more,” this priest cautioned me against “taking scripture out of context like the Protestants do.” After several weeks of despair, I decided that this what he said was simply a lie, and it ruined my relationship with him, whom I had considered a friend.

The priest in the confessional yesterday, however, said something that changed my heart. What my parish priest meant, he suggested, was that God allows us to suffer so that we can join our sufferings to His on the cross and offer them to Him in reparation for our sins. This seemed so different from the punishment I had inferred from my parish priest’s words, so different from the cynical spiritual economy I had imagined as God killing two of my babies for the one I had killed. I decided to try it, and to experiment with the belief that God’s allowing us to suffer might be for our good rather than for our spiritual destruction. The arrival of Michael O’Brien’s newsletter today illuminated this theology of suffering for me in a timely and beautifully cogent way.
Posted by Pentimento at 11:04 AM 10 comments: