Artists in the Kitchen 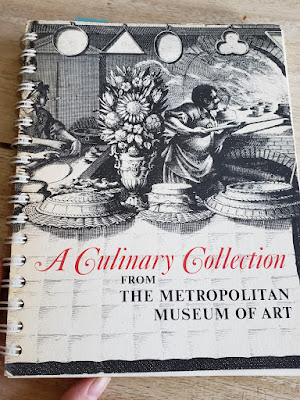 Among other Sisyphean pursuits, I've spent the summer culling books from my chaotic "library." It's been an anxious and painful task, because it's forced me to confront my neurotic used-book-buying habits, and to recognize the ways I've attempted to create a kind of escapist utopia in my house by populating it with library discards. I discovered early on in our sojourn in northern Appalachia that there are fantastic library book sales here, and it's hard to pass one by when hardcovers are $.25 (I suppose this says something about the reading habits of northern Appalachia or of post-industrial America in general, but that's for another post). Those library discards -- some of them truly wonderful books -- have then gotten unpacked and placed in half-hearted, meandering subject order on various already-groaning shelves around the house, with the result that, when I search the shelves  for a book, I can't find it, and I panic. So my first step this summer was to cull the duplicates, of which there were more than I care to admit -- because, if I find something wonderful that I already have, I always purchase it, because it's wonderful, and no one else will want it, and I might lose the first one -- a thought process that has ended up, more than once, with me not being able to find either copy of the book, and then buying another on Amazon.

I grappled with most of this, and ended up donating 17 boxes of books to the library for their next book sale, which I am planning to not attend, or at least to drive by with my knuckles white from my death-grip on the steering wheel.

There is one category of my collection, however, that I will not be culling. It is my two shelves of vintage spiral-bound community fundraiser cookbooks.

It's hard for me to explain how I feel about these books, which were published from the 1950s to the 1980s, produced by such organizations as the Women's Service League of St. Paul's Episcopal Church of Burlington, Vermont; the Valley Calligraphy Guild of Harrisburg, Oregon; and the St. Joseph Altar Rosary Society of Endicott, New York. Looking through them gives me a sense of excitement and anticipation, as if I've discovered a secret passage back to a lost world -- not only a time, but even a place, of wisdom that I lack: a world where a budget-stretching, wholesome meal made from cans of soup, packets of Jell-O, and bouillon cubes would draw a family together in a near-mystical communion, giving all its members the strength and comfort they needed to face the confounding exigencies of the world beyond the kitchen table.

I love to read the names of the recipes in my spiral-bound cookbooks. There is Priest's Goulash; there are Lasagna Rollups. There is City Chicken; there is Grandma's Waistline. There are Orange Chiffon Pie and Cottage Cheese Cake. There are many, many casseroles. Some of them from the late 1950s and very early 1960s are hand-lettered in an artistic, leftward-slanting calligraphic hand that must have been popular at that time, since it is found across vastly distant regions. Some of the hand-lettered cookbooks also include little pen-and-ink drawings by the recipes' authors, generally the cooks' own idealized images of times that were long past even during their own lifetimes.

I also cook from these books, and it is a great pleasure for me. The best of them recipe-wise are, perhaps unsurprisingly, compilations in support of big-city cultural institutions: I have, for instance, a cookbook produced by the staff of the Library of Congress; another, called Artists in the Kitchen, by the Women's Council of the the Memorial Art Gallery of the University of Rochester; and two published by the Junior Committee of the Cleveland Orchestra. One of my favorites, however, was created in 1973 by the staff and board of trustees of the Metropolitan Museum (pictured above). It contains a short foreword:

It is a little-known and indisputable fact that museum people devote a great deal of thought and time to food, and the fare at the tables of colleagues is more often than not of the highest quality. We hope that you will enjoy this collection of recipes . . . the Museum's first venture into the culinary aspect of the arts.

And the recipes are redolent of a mythical New York City past. There are such 1970s-era staples as hot crab meat, Roquefort cheese ball, and tuna casserole, and there are still hints here and there of the rapidly-fading favorites of an earlier spiral-bound era, like green rice baked in a mold. There are also some bizarreries that, in my fantasies about what "museum people" must be like, I could not have imagined -- such as this one for spaghetti sauce: 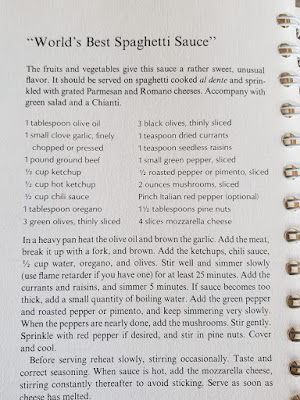 But most of them are charming, interesting, and even touching -- like this one, whose name, use of Teflon, and offhand acknowledgment that it "will do for a light supper," combine to make me sigh with longing for an easier time -- a time in which an omelette with a bottle of white wine and a green salad would have made a lovely Sunday supper, and in which you would have eaten it with someone who loved beauty and simplicity, as you do. 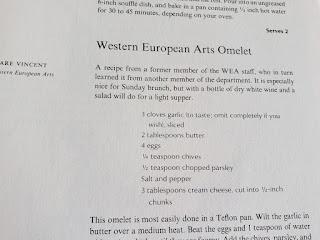 But this one treads, for me, uncomfortably close to pathos. Mr. Hawkins was a bachelor, who nevertheless "[impressed] his guests with this spectacular dessert." I think about Ashton Hawkins. Was the notation of his bachelorhood a signifier of gayness? Or was he, perhaps, just lonely? I think I would have liked to have sat at his table and been impressed not only with his spectacular Calvados Soufflé, but also with the wit and mirth of his company and his colleagues'. 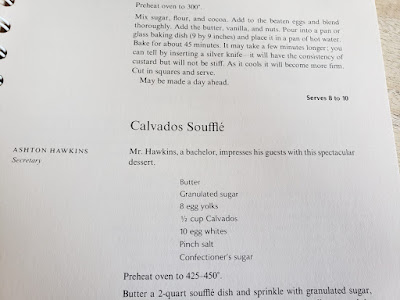 And it's not just the bachelor Ashton Hawkins. It's also Margot Feely, who submitted a recipe for "Desperation Shrimp," a lifesaver when dinner guests show up unexpectedly. It's Katushe and Danny Davison, who "have lived in London for the past several years and have found themselves in the enviable predicament of having their freezer bulging with pheasants," and who, to clear some space, invented the "excellent dish" of Pheasant Hash. It's Edward M. H. Warburg, who avers that his Veal Casserole with Peas, and his Curried Eggs, "are amongst my wife's favorite recipes."

Where is Mrs. Warburg now? Where is Ashton Hawkins and all of his colleagues? As Czeslaw Milosz wrote in his 1936 poem "Encounter":


We were riding through frozen fields in a wagon at dawn.
A red wing rose in the darkness.

And suddenly a hare ran across the road.
One of us pointed to it with his hand.

That was long ago. Today neither of them is alive,
Not the hare, nor the man who made the gesture.


I ask not out of sorrow, but in wonder.