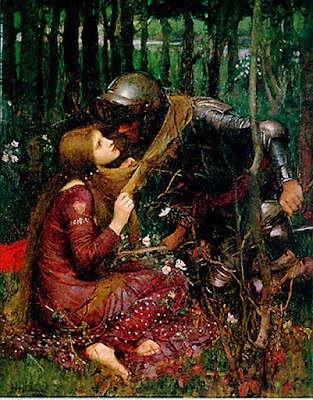 One summer a long time ago, I was a waitress at a popular restaurant in the publishing district. Late at night, at the end of a busy and generally lucrative shift, I would take a cab home with my tips rolled up in my little black waiter's apron. I was living at that time in Fort Greene, Brooklyn, a neighborhood that is now impossibly expensive, but was then a sort of African-American bohemia. A legendary experimental jazz musician lived nearby, and I was over at his house fairly often, because his girlfriend was a friend of mine. Spike Lee lived around the corner, and I would pass him walking his dog on my strolls through the neighborhood.

My apartment was at the back of the third floor of a brownstone, and it was quiet, which was nice, because I stayed up late in those days after winding down from the intensity of a busy night shift, and consequently I slept late in the mornings. It was a beautiful thing to be able to sit up in bed in the mornings and look out of the window and see not a concrete-paved airshaft, but the lush vegetation of old-growth trees-of-heaven filling the small lot that was my backyard, though I had no access to it, and the backyard of the brownstone on the block behind me. The fern-like branches of the trees -- ailanthus altissima, the eponymous tree of the great novel A Tree Grows In Brooklyn -- seemed to be piled up in the condensed space of the lot, frond upon feathery frond. They emitted a dark, dusty vegetable smell, the fragrance, to me, of a New York summer. I would get out of bed and make a quart or so of strong coffee in my little Italian stovetop espresso maker and drink it all, sitting at the table in my kitchen-slash-living-slash-all-purpose room. Then I would practice. It suited me to work at a night job, because I felt like I was giving the best energy of my day to my singing, and whatever was left over could be tossed casually into the hungry jaws of the chi-chi-restaurant-going public, which seemed to me, as Enid Bagnold wrote in another context in the wonderful book National Velvet, "like a million little fishes after bread."

I lived alone, and while the solitude felt rich and redolent, it was also devastatingly lonely. I was in love with M., and he had treated me cruelly. In my anxiety and sorrow I didn't have much of an appetite; besides the coffee -- Café Bustelo, which I made so thick that it could probably have been classified a foodstuff -- mangoes and Italian bread were the mainstays of my diet. One night, I recall, I sat alone at my table drinking Wild Turkey -- M.'s favorite libation -- while listening to Joni Mitchell, which, by the next morning, had caused me to swear off Wild Turkey forever, if not off M. or Joni Mitchell.

All during that summer and into the fall, a man sang in one of the apartments in one of the buildings on the block behind my own. Each day, across the thick, weedy verdure of the back lots, I heard this man's stentorian baritone boom out as he sang along to recordings. He would keep it up for at least an hour, and longer on Sundays -- sometimes the entire afternoon. I don't know what it was that he sang, or what he was listening to; the music and the words were indistinct, muffled by the distance across lots and absorbed by the dense urban vegetation. But it was something anthemic and simple -- likely a soul ballad, from what I could make out -- and he sang it over and over again. I can still hear his voice rising the interval of a major sixth, with a flourishing crescendo, at the chorus.

Rather than annoying me, I found the phenomenon of the invisible singing man and his incomprehensible, repeated song strangely comforting. It gave a rhythm to my day. Perhaps I was, for him, also an invisible singing presence, with my caffeinated late-morning vocalizing. I remember that during that time, I was working in particular on the song "Waldgespräch" by Schumann, about a man journeying through the woods, who is seduced and entrapped by the Lorelei; she tells him, in the last vocal statement: "You will never leave these woods again."

And perhaps I identified with the Lorelei, that siren of the Rhine who enchants men with her song. Believing that my own singing was a tool, likely the only one I had, I honed it in the hopes that it would precede me into the world and bring me back the things I wanted: security, peace, happiness, and love. But it didn't. And I was not the Lorelei. I was the hapless man in the legend, enchanted by myths of love and illusions of my own power. And everything that, at the time, I thought real and vital turned out not to be, though it took me many years to grope my way out of those woods -- even though they were not really woods at all, only Brooklyn back lots overgrown with weeds -- and see it.