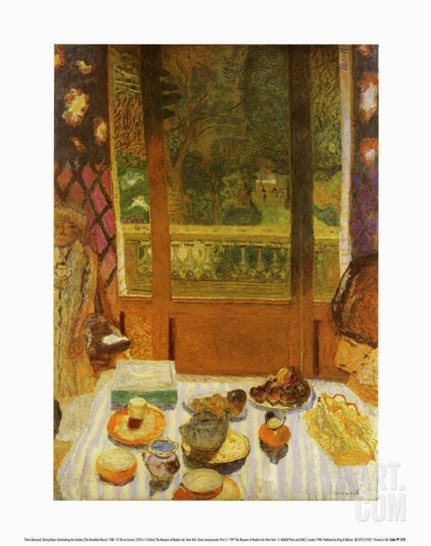 Lent has been bleak. I suppose that's how it should be: we're supposed to acquaint ourselves well with ashes -- with the taste of ashes, with becoming ashes. I've never been good at keeping up my prescribed penitential practices, especially where food is concerned; I've always felt as if giving up this or that food  was just too simple, too elementary, a mere beginner's step in the spiritual life, and that, since I don't have problems or obsessions or issues with food or drink, I'll just move on to the more advanced exercises, all of which shows, of course, exactly how warped I am by pride.

So this year I've been rigorous about, among other things, not eating between meals, and it's been surprisingly hard.  There's something so consoling about elevenses, or that late-afternoon bite of something -- so much so, in fact, that I've come to understand, this Lent, that turning to food has always been a way I've kept myself from crashing emotionally. This Lent, I've crashed.

I spend a good deal of time each day thinking about food, about certain tastes and textures, about how a bite of lemon pound-cake with a cup of black coffee at four o'clock, or a glass of flinty, ice-cold white wine an hour or so later, or even some peanut butter smeared on a saltine at midday, would make me feel. And I imagine that these things would make me feel resplendent, transformed, and would make life seem bright and gay, full of whispered possibilities. And then I shake myself awake and remind myself that this is food we're talking about -- ballast against hunger, disease, and death for most people in the world, and for most people far from delicious, much less redolent of fantasies and hopes -- and that building castles out of pound-cake is a distinctly First-World concern.

And then I think about the other things that I love, that I rely upon, that without which I would feel as if my life were truly a pile of shit. The main one is music. Slipping the Crooked Jades or one of Beethoven's late string quartets into my car CD player opens up worlds upon worlds for me as I drive through the bleak post-industrial landscape of my town; the music lends a warmth, a sort of hazy sheen to the phenomenal world, making what is often merely indifferent and sometimes hostile seem benevolent, making what's unendurable seem like a bad dream from which one will soon awake. But perhaps the world is not really so beautiful after all, and so I turn off the CD and navigate around the winter-cratered streets in silence.

And then I mourn, because, in these moments, it strikes me that everything I love is gone, or is going, and that everything good is disappearing from the world. The record of our earthly sojourn is one of loss. The annals of recorded sound, the smooth pages of poetry, are cries from beyond the grave, where we, too, are going, who knows when? "The curtain descends, everything ends/Too soon, too soon."


Sometimes I so envy our Pentecostal brothers and sisters. They have ecstasy, they have fellowship. We have rubrics, and wandering in the dark, and spiritual dryness. They go from door to door in the ghetto and ask people what they need -- do they need a window fixed, a bag of groceries, maybe someone to pray with them? And then they do those things for and give those things to those complete strangers, those others, those neighbors. My mother used to do this with her church. As for us Catholics, we shun each other at Mass and then have arguments in each others' comboxes.

As I was waking up this morning, I mentioned to God that I'd given up everything I loved for him. My old life, research, singing, travel, pretty clothes, intense friendships, fun, my beloved city, the feeling of being an expert, even an authority, at something. Having only two children means that I also have had to give up the happiness of babies after only a short time, and to move swiftly on to the difficulties of everything else, especially since both my children have medical needs. And adopting means always being aware of a former but unbridgeable pain and loss and wounding, and means praying, as I stumble around in the dark, that I might be able to assuage it, and realizing how impossible that is and how inadequate I am. However, since we don't generally have any of the ecstatic things, the waves of warmth and happiness, the mystical auditions, I got no response to any of this from God.

Lent always seems as if it goes on forever. It seems as if it will go on even after Easter is over. I've always thought that at some point, later on, in the future, everything will be settled and peaceful and good -- that one day the world which is hinted at in the music I so love will become apparent. But perhaps that will never happen, and we are all just headed down, into, as a character in a book I read put it, the underground river, from which there is no return and no going back.

One of Debussy's earliest songs is "Beau soir," with a text by Paul Bourget, which says, in translation:

When streams turn pink in the setting sun
And a slight shudder passes through the wheat fields,
A plea for happiness seems to rise out of all things
And mount up towards the troubled heart,

A plea to savor the charm of life
While one is young and the evening is fair:
For we are going away, like this wave is going away,
The wave to the sea, we to the grave.

I would like to have been able to add something to the annals of beauty, the record of loss, in my brief time here. I don't know if I will, but we must keep doing the work that's assigned to us each day.