From the Salon to the Carmel 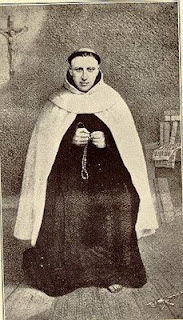 Yesterday was the anniversary of the birth of another “musical saint,” Fr. Hermann Cohen (1821-1871, pictured above), known in religion as Père Augustin-Marie du Très Saint Sacrement. Hermann, a brilliant child prodigy pianist from a liberal Jewish family in Hamburg, came to Paris at the age of thirteen to further his studies, and became the friend and protégé of Franz Liszt. Liszt gave him the pet name “Puzzi,” meaning cute or darling, and Hermann grew his hair to his shoulders in emulation of the master and made the rounds with him of the fashionable salons of Paris It was in the salons, he later wrote, that he discovered the mid-nineteenth-century philosophies of

"atheism, pantheism, Fourierism, Saint-Simonism, socialism, riots, the massacre of the rich, the abolition of marriage, terror, sharing of goods, the common enjoyment of all the pleasures; these notions soon found a place in my fourteen-year-old head . . . . I soon became one of the most zealous propagandists of those sects which had vowed to renew the face of the earth."

In Paris, Hermann also became hopelessly addicted to gambling. He and Liszt eventually parted ways after Hermann was accused, most likely unjustly, of embezzling Liszt’s concert proceeds. Hermann’s career continued in England, where he became the recital accompanist of the superstar tenor Mario (scruples about his noble birth discouraged this singer from using his last name).

Little by little, conscious of a great spiritual longing, Hermann was drawn to the Catholic Church, and was baptized in 1847. He entered the Carmelite novitiate in 1849, and was ordained a priest in 1851, a remarkable act considering his recent baptism, and one which required a papal dispensation. Hermann (now Fr. Augustin-Marie) was soon well-known throughout France and the continent for his fiery preaching, and in 1862 was asked by Pope Pius IX to restore the Carmelite order to Britain. He sailed for London, where he established several convents and led the first Marian procession England had seen since the Reformation. Fr. Hermann also initiated the practice of nocturnal adoration, which soon spread throughout the world.

Fr. Hermann died in 1871 of smallpox contracted while ministering to wounded French prisoners of the Franco-Prussian war at Spandau Prison. I had heard that his cause for canonization is being examined, but a Fr. Hermann scholar I know has reason to believe that the process has stalled at the Vatican. For more, see this article which originally appeared in the Journal of the American Liszt Society in 1994.
Posted by Pentimento at 4:41 PM

A most interesting conversion story indeed. Thank you for posting this and good luck with your blog.