Our Lady of Guadalupe and the Pro-Life Movement 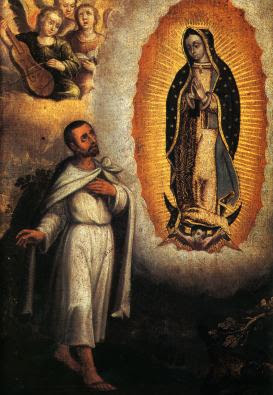 Today is the Feast of Our Lady of Guadalupe, patroness of the Americas and also of the unborn. The pro-life movement has taken her as its own patroness for this latter reason.

I have no wish to delve into the politics of the pro-life movement here. To do so would be to duplicate the content of countless other blogs, but would do nothing to advance the cause. My fellow blogger Kyle Cupp, who has written extensively about pro-life politics from surprising and provocative angles befitting his background as a philosopher, is a good place to go for commentary that advances the dialogue toward the ideal state of healing.

As my beloved Father Hermann Cohen, a fellow penitent and a great devotee of the Blessed Virgin, once said in a sermon, "We have been nailed as signposts before the Gates of Hell, warning others, 'Do not go this way!'"

My prayer to Our Lady of Guadalupe today is that she might move the hearts of the virtuous members of the pro-life movement to accept and embrace the fervent witness and participation of women like me. For there are many of us in the movement, including many who are not open about their penitence and its cause. Their reticence is the result of the reality that many others in the movement -- like many faithful Catholics, sad to say -- have an attitude toward penitence not unlike that of the Prodigal's older brother. It would do us all well to ponder the great mystery inherent in the fact that God forgives even great sin, and remembers it no more. Moreover, He rejoices more over the return of the penitent than over those who have no need for forgiveness.

I suspect that women like me could be the future of the pro-life movement, especially as the hearts of so many of our fellow citizens become more and more complacent about the sanctity of life. Indeed, it's not impossible that penitent post-abortive women could even in some way revitalize the Catholic Church in America.

H/T for the quote from Father Hermann: Fallen Sparrow
Posted by Pentimento at 11:44 PM

One of my dearest friends is post-abortive. It took her years to tell me and she said she hates to tell other pro-lifers because of the . . .hostility she gets. One man told her "you women need to repent for the rest of your lives." There are some serious men with anger issues in the pro-life movement. She had to take time off from post-abortive counseling, not because the other women were too much, but because of the non-abortive members in the community.

RCM, of course, we should be penitent, and penitence is part of the ongoing conversion that ALL of the faithful should strive and pray for constantly. But there you have it, the judgment of the Prodigal Son's -- or Daughter's -- older brother.

In their defense, I think it's hard for those who haven't been guilty of grave sin to accept the mercy -- and the joy -- with which God receives serious sinners who repent. They are like the workers hired early in the day in Matthew 20:1-16, who resent that the landowner pays the same wage to those who came at the eleventh hour. The resentment of the just is human nature, and that is wherein the challenge of Christianity lies for them: they are called upon to transcend human nature and view the lowlifes and sinners they are inclined to scorn with the eyes of God. I've encountered this resentment from women as well as men (most hurtfully from someone who made a point of reminding me of my sin -- which God has forgotten -- in a fit of self-righteous anger). These people need our prayers; I pray for the ones I've encountered in my life (and on this blog), in particular, that they will understand God's mercy and know it first-hand in their own lives.

Please remind your friend that the priests and religious who work in the trenches with post-abortive women and men -- including the Friars of the Franciscan Renewal and the Sisters of Life -- make no such judgments about women and men who have had or participated in abortion. They love us. And they know that the potential to reinvigorate the pro-life movement is waiting to be awakened in these penitents. The pro-life movement would do well to look to this example, especially now that abortion is most likely going to be less restricted in the near future.