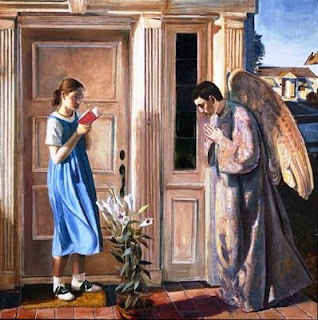 In the 1990s, my first husband, M., had the type of day job that was much coveted among struggling New York artists.  He worked in the word processing center of a global investment bank, using the most arcane and esoteric features of Microsoft Office to create marketing materials that helped bankers pitch high-level investments to potential clients.  The work was highly skilled and well paid, and, best of all, the word processors didn't have to deal with the bankers themselves, for whom, it must be admitted, they had little respect.  That was the job of the word processing center supervisor, who was the liaison between the center workers -- all of them highly-educated, underemployed artists, or doctoral candidates who would probably never finish their dissertations -- and the bankers, who were generally first- and second-year analysts just out of college, living four or five to an apartment (but always in doorman buildings in tony neighborhoods) and working a hundred hours a week in expectation of Christmas bonuses that often far exceeded their annual salaries.

M. was very good at his job (he was good at everything he did), and he and his supervisor, a young black grandmother named Margaret, held one another in affection and esteem.  But his temper was such that, in those pre-iPod days, after he threw his Discman at his typing stand in response to a banker's unreasonable request and told Margaret to tell the banker to do the effing job himself, she said to him, "M., I love you, but I can't have you on my shift no more" (my friend Soprannie, who worked with M., was an eyewitness to this event).  After that, M. worked the evening shift.

Margaret was a born-again Christian who used to reminisce, not entirely without nostalgia, about her pre-conversion days of nightclubbing, promiscuity, and recreational drug use.  "Thank God for Jesus," she used to say.  " 'Cause if it wasn't for Jesus, I'd be bad."  We used to laugh at this, as if it were Margaret's standard shtick, but today at Mass for the Feast of the Immaculate Conception, I realized how starkly honest she had been.  The priest noted that the Bible begins with the story of a woman -- Eve -- and ends with the story of another woman, the New Eve, the woman in Apocalypse who is clothed with the sun and has the moon and stars at her feet.  I thought about the fact that the Bible opens in paradise, where the man and woman are naked before one another and are not ashamed, and how, by page three, it's all over:  the angel drives our first parents weeping from the valley of joy and delight with a flaming sword, and now we eat our bread mixed with ashes.

The old joke is that, if you look hard enough, you can find your own phone number in the Bible.  Well, I know mine is in there.  Like our first parents, I have been tempted with the Ur-temptation, the one that has us believing we can have power equal to God's, which is certainly the root of all the nightclubbing, promiscuity, recreational drug use, and so forth.  But the education in evil I received before my conversion was nothing compared to what I've learned about it since.  I suppose it takes an egregious sinner to sneak up in among the righteous and see how very, very many of them take the stance of the Pharisee in the temple, and yet do not see themselves reflected in that parable.  (This is true in a special way in the pro-life movement, which is full of post-abortive women who hesitate to speak openly the joyful news that they have been forgiven, for fear of the poorly-concealed horror in which they are held by some of their less-egregiously-sinful comrades.)  I myself have incurred scorn in the comboxes on this blog from virtuous Catholics, who appear to believe that I don't deserve to call myself a penitent, penitence being reserved, perhaps, for those who sin but lightly.  Well, wake up, people: man is fallen, and we're all naked under our clothes, and not in a pretty, Renoir sort of way, either.  In this season of penitence, it's best to admit that, if it weren't for Jesus, you'd be bad. Maybe you'd be bad like Margaret, maybe you'd be bad like me, or maybe you'd just find your own particular level of badness.  But there are few transgressions of which that the human heart is not capable, no matter how virtuous the mind that believes it controls that heart; and to the good people who say to themselves and each other, "I would never do that" (an assertion I've often heard made, for instance, about abortion, from those on both the pro- and anti- sides), I say, "How do you know?"  We should pray in all humility that we'll never be tempted to see that (or any other sin) as a good option.  As Solzhenitsyn said, the line between good and evil runs through every human heart.  That means yours.

Which is why this feast day is so great.  Our last chance, our true medicine, our only hope, was born to a young girl not, perhaps, unlike the one pictured above, in John Collier's startling painting of the Annunciation, who was just like us, except for the fact that God honored her by removing from her the indelible bruise and brokenness resulting from our first parents' devastating fall.  O Mary, conceived without sin, pray for us egregious sinners, who are the happiest of all people because we have recourse to you and your powerful intercession.

Now is a good time to revisit this stark, powerful performance of the old carol "Remember, O Thou Man."
Posted by Pentimento at 11:19 PM

Very beautiful and thoughtful post.
post-abortive women who hesitate to speak openly the joyful news that they have been forgiven, for fear of the poorly-concealed horror in which they are held by some of their less-egregiously-sinful comrades

I feel this acutely.

Thank you from another penitent for your excellent reflection.

Thank you all and God bless you.

Coward, that is very hard, and I know how it feels.

Best post I've read all this year, and since 2009 is almost over, I guess the best one I'm gonnna read this year.

Thanks, Warren. I'm glad you liked it.

Thank you again. I'm so glad you're still blogging.

Hala, I owe you a phone call - will try today.

Hala, my friend! I miss you! Sorry w3e won't see you at your annual post-holiday party!

Nice to see you here!

Dropped in thanks to Mrs. Darwin. Powerful preaching, there. Amen!

Thanks and welcome here.

Whose is this painting? So mesmerizing

It is "Annunciation" by John Collier, and it is mesmerizing, isn't it?