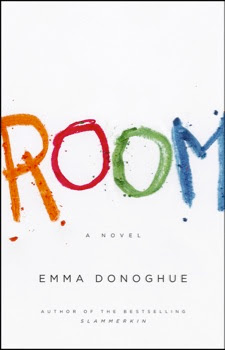 I'm still tethered to my desk editing a dense musicological tome, but I took a break this weekend to read a book I'd put on my holds list at the local library, Room, by Irish-born Canadian writer Emma Donoghue.  We were out of town at a wedding, and I sat on the lid of the toilet seat in the bathroom of our hotel room so as to be able to read it into the wee small hours without waking my family.  I found the novel so profoundly affecting that I am taking still more time from my deadline-dependent work to write about it here.

Room is the story of five-year-old Jack, who, as the narrative begins, has lived his entire life, along with his mother, in captivity in an eleven-by-eleven foot room.  When the two are unexpectedly thrust into the world, both must learn to redefine their relationship to it, and to each other, in ways that are, in a sense, even more painful and traumatizing than their captivity has been.  Donoghue draws freely upon children's "reversal" literature, most prominently Alice in Wonderland, to present the reader with the story of one of the great developmental dilemmas faced by all children -- how to understand, interpret, and navigate reality -- made exponentially more poignant for Jack by the sensory and social deprivation of his early years.

Jack's narrative voice is captivating, and his young mother is a giant of strength, love, and resourcefulness, who, in their imprisonment, has turned Jack's cruelly confined world into one of beauty and adventure.  The two are completely dependent upon each other, and the transition to a less-enmeshed relationship is one of the most difficult challenges Jack faces in "Outside."  For this reason, I think the book speaks especially to mothers, whose most important task is preparing and allowing our children to stand on their own and to emerge into a world not bounded or defined by us.  As the mother of a son approaching Jack's age -- a boy who, like Jack, has outstanding strengths, coupled with significant difficulties negotiating the sensory and social worlds -- I felt an even deeper kinship with the novel's narrator.

In addition to the compelling character of Jack, and the delicately-drawn relationship between him and his mother, Room fascinated me for its description of a child developing in confinement, a topic that has been an interest of mine since I saw Werner Herzog's film The Enigma of Kaspar Hauser while an undergrad, and, later, sang the wonderful Brahms settings of poetry by Georg Friedrich Daumer, who had cared for Kaspar Hauser after the latter was found, as a young man, wandering the streets of Nuremberg after a life spent in captivity.

I loved this book so much that I am going to try to sneak in a second read before it's due back at the library.

Here is an interesting clip of Emma Donoghue explaining how she devised Jack's narrative voice.

This does sound fascinating. I've added it to my dismayingly long list. (But, on your recommendation, I'll let it cut in line!)

I look forward to hearing your thoughts on it, Rodak.

Oh, I really want to read this now (just read the Amazon sample) and yet I'm almost sick with dread at the premise.

It's definitely disturbing, Mrs. D., but it's ultimately redemptive.

Wow! I think my reaction is exactly the same as Mrs. D's. I really want to read it and yet... just the thought of that captivity. Sick with dread does seem to be the right way to put it. I'm putting it on hold at the library now.

I should reiterate that it is a disturbing book. But in the end I found it very uplifting. It reminded me that there is a thread of grace, sometimes a very luminous one, that runs through every human hell there is.

Well, I'm sure that it's disturbing in a different way at least. Hood was disturbing in a "graphic depictions of lesbian sexual relationships" sort of way. I think the subject matter here has more room for hope.

Oh yikes, Melanie. I just did a search for "Hood," and it seems to have won some sort of gay literary prize. Now it occurs to me that the "partner" listed in the author bio, with whom Donoghue has two children, might be a woman. Sigh.

At any rate, there's none of that in Room, really no sex at all except for what is described obliquely.

I just finished Room and am so very glad I picked it up. Thank you for the recommendation. I find myself paying more attention to my children, more sensitive to their dependence on me, more willing to hold them close, knowing how fragile that bond can be.

A few thoughts because I just have to write them somewhere as I try to process everything.

I don't think this novel would have worked with any other narrator. Jack's voice is so perfect, though, such a mixture of the precocious and the terribly naive. I love the use of proper nouns to name everything in his environment. It captures the concreteness of the child's perception. He's so innocent and thus, as you say, most of the worst ugliness is experienced obliquely. It is already almost more than one can bear; if it were told by the mother it would be too much. An omniscient
narrator peering would seem to be verging on the pornographic, if that makes sense. That outside view would be yet another violation of both Jack and his mother.

His mother's sheltering reminds me a bit of Roberto Begnini's father in Life is Beautiful, the way the child is shielded from the worst of the horror by a game of let's pretend.

I'm sure I'll have more to say as I think about it. If I didn't have a huge pile of books from the library I would be tempted to go back and re-read. Perhaps I'll try to formulate a blog post but for some reason I've been finding it almost impossible to do any book blogging in the last six months or so.

I'm so glad you liked it, Melanie. I got it for my best friend Rosie and gave it to her when I was in New York last week, and she just called today to talk about it. It's one of the best books I've read in a long time.

I just now finished reading "Room." I loved every page of it. I found it to be an extremely complicated narrative, despite its surface simplicity. It raises a lot of questions. It certainly (imo) does not present an optimistic outlook on human existence. It is more a "damned if you do; damned if you don't" message. I was struck by Jack's statement, after they were "Outside":
"I don't say because of manners, but actually he's got it backwards. In Room I was safe and Outside is the scary."
The truth of this resides not only in the circumstance that Outside is unfamiliar.
On the other hand, the kind of paradise that Room was for Jack would have necessarily ended as he grew out of childhood, or else have become hideously grotesque. And for Ma, Room was never a tolerable situation. Yet it is telling that she attempted suicide only once they were Outside.
As I say, it is complicated. But it is fascinating and brilliantly conceived. Thanks so much for bring it to my attention.