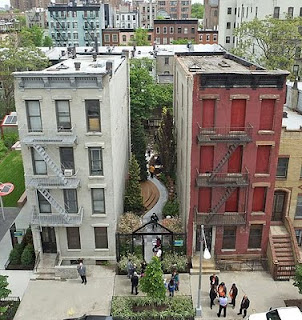 1. It's that time of year again, August, the cruelest month, mother of nostalgia.  New Yorkers and former New Yorkers, do you love August there as much as I once did?  Yes, it's hotter than hell (though the hotter-than-hellness has intruded ever earlier into New York summers over the past few years).  But the  sultry August air is redolent with mystery as it shimmers over the  asphalt, and cicadas sing even in the scanty grass that grows up between sidewalk squares, even in the parts of the outer boroughs most characterized by chain link fencing, used car lots, and metal recycling plants.  Every patch of green is like a reminder of lost paradise, reminding me of Tennessee Williams's poem "Heavenly Grass":

3.  I thought about New York again when a contractor came to put in a new front door.  He is my across-the-street neighbor's father-in-law.  The guy who paints your apartment in New York is always your super's father-in-law (sometimes his brother-in-law; sometimes both).  These in-laws rarely speak much English; nor did the father-in-law who came today.  The difference was that this father-in-law was Greek, and the New York fathers-in-law are usually Serbian or Dominican.

4. On Sunday I was so overcome with loneliness that I stood at my kitchen sink in Northern Appalachia and bawled like a child.  It's been nearly three years, and I still feel like I'm floating, untethered, in space.  But I tell myself how much better it is for children to be here, and it is, especially for children, like my son, with special needs.  Though I've considered homeschooling him, I know he needs to be with other children, and, though I'm an experienced teacher (albeit of older students), I'm not an occupational, speech, or physical therapist.  He is getting a panoply of services through our local school in the fall, including a one-on-one aide in his mainstream kindergarten classroom.  He wouldn't get that in New York.  No one gets one-on-one aides anymore.  Parents with means generally send their special-needs children to private school, and then sue the city for tuition reimbursement.  The city usually settles, because even private-school tuition in New York City is less expensive than a one-on-one classroom aide.

Today was a beautiful day, and we spread a picnic blanket and had our lunch in the backyard.  Though my son generally prattles on constantly, a rare peace settled over us as we turned our faces to the sun and listened to the breeze rustling the maples and copper beeches.  I let myself relax for about five minutes, which is something I would never do in New York.  I thought where we would be at that time on that day if we had remained there: probably at a playground, which would require me to be on the continual qui-vive.  I have heard that, when your children are of school age, you can make friends with other mothers at pick-up time.  I wonder if that will happen for me.

5. Heimweh, as you will know if you're an aficionado of German romantic poetry and music (or if you read this blog regularly), is often translated as "homesickness," a spiritual yearning for the home to which the sufferer can no longer return.  Nevertheless, the term, which originated in seventeenth-century Switzerland, was coined to describe the actual physical illness, sometimes resulting in death, experienced by Swiss regiments when they were stationed far from the Alps. "To ward off [this debilitating] nostalgia, Swiss soldiers were forbidden to play, sing, or even whistle Alpine tunes," because Alpine melodies "haunted the hearer with 'an image of the past which is at once definite and unattainable.'"

Perhaps Heimweh is, itself, a kind of disability.


Above:  Community garden in East Harlem.
Posted by Pentimento at 6:41 PM

I know the feeling of homesickness so well. People don't understand but it can really be emotionally and even physically debilitating, especially if combined with other factors. God bless you.

I completely understand. The longing for home can make living in the present very difficult, especially if you are also lonely. My first year here in eastern North Carolina has been purgatorial, and my dissertation basically stalled because of my depression. It's getting better for me now. I hope it gets better for you, too.

Thank you, Elena and Jane, and, Jane, prayers for you and a timely and successful completion. I browsed to your blog and saw that you're a musicologist (my doctorate is a DMA in voice performance). I believe that a close friend and colleague of mine may have taught in the music department of your university (he's teaching elsewhere now).

Nothing about August stands out from my New York memories, although there are definitely things I miss about summer there. For one thing I miss having a stoop to sit on late at night, late enough that the bricks might even feel cool and you'd want a light sweater. And feeding the birds (including pigeons, of course) very early in the morning.

Did you listen to the song, Rodak? It's killer.

Once more you blog better on a nostalgia trip than I would blog on a real one.

When my wife and I lived in the Midwest, I haaaad to go home to Alabama for Thanksgiving. We drove almost to the Ohio River when our car acted up. We sat down for breakfast somewhere in southern Indiana, and my wife proposed we give up and limp back to that part of Indiana near Chicago. Right then a waitress came to take our order.

She asked two questions not asked unless you are very close to the Ohio River: "Toast or biscuits?" "Hash browns or grits?" I started crying right there in the restaurant, a weepy Irishman.

We rented a car and drove to Alabama.

Oh, TQ . . . I so know what you were feeling that morning. Great story.