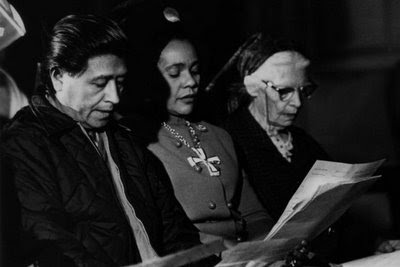 In her own words:

"'[P]hysical sensations' allured me. I lived a social-activist Bohemian lifestyle in Greenwich Village, New York City. I think back and remember myself, hurrying along from party to party, and all the friends, and the drinking, and the talk, and the crushes, and falling in love. I fell in love with a newspaperman named Lionel Moise. I got pregnant. He said that if I had the baby, he would leave me. I wanted the baby but I wanted Lionel more. So I had the abortion and I lost them both. . . .

I hobbled down the darkened stairwell of the Upper East Side flat in New York City. My steps were unsteady. My left arm held the banister tightly. My right arm clutched my abdomen. It was burning in pain. I walked out onto the street alone in the dark. It was in September of 1919. I was twenty-one years old and I had just aborted my baby.

. . . . Lionel, my boyfriend, promised to pick me up at the flat after it was all over. I waited in pain from nine a.m. to ten p.m. but he never came. When I got home to his apartment I found only a note. He said he had left for a new job and, regarding my abortion, that I 'was only one of God knows how many millions of women who go through the same thing. Don’t build up any hopes. It is best, in fact, that you forget me.'

. . . . I always had a great regret for my abortion. In fact, I tried to cover it up and to destroy as many copies of The Eleventh Virgin [her 1924 autobiographical novel, in which she wrote about the abortion] as I could find. But my priest chided me and said, 'You can’t have much faith in God if you’re taking the life given to you and using it that way. God is the one who forgives us if we ask, and it sounds like you don’t even want forgiveness — just to get rid of the books.' I never forgot what the priest pointed out — the vanity or pride at work in my heart. Since that time I wasn’t as worried as I had been. If you believe in the mission of Jesus Christ, then you’re bound to try to let go of your past, in the sense that you are entitled to His forgiveness. To keep regretting what was, is to deny God’s grace."

John Cardinal O'Connor, the late Archbishop of New York who opened her cause for canonization, said of Day:

"[A]fter becoming a Catholic, she learned the love and mercy of the Lord, and knew she never had to worry about His forgiveness. (This is why I have never condemned a woman who has had an abortion; I weep with her and ask her to remember Dorothy Day's sorrow but to know always God's loving mercy and forgiveness.) She had died before I became Archbishop of New York, or I would have called on her immediately upon my arrival. Few people have had such an impact on my life, even though we never met."

Servant of God Dorothy Day, pray for us all.
Posted by Pentimento at 10:56 AM

Beautiful post. I need to come over here more often.

You're welcome any time, Dave.