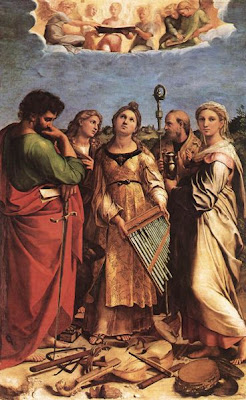 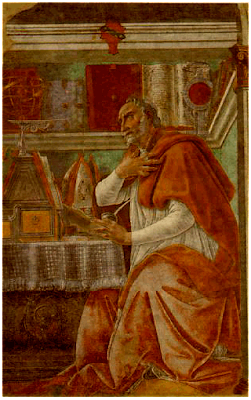 Today is the birthday of Saint Augustine of Hippo, Doctor of the Church, who was born in 354 in what is now Algeria. Augustine's conversion from Manicheanism to Christianity was accomplished through the sense of hearing; as he wept in a garden in Milan, unable through the action of his will to free himself from his slavery to sexual sin, he heard the voice of a child repeating, "Pick up and read, pick up and read [tolle legge]." He picked up a Bible that was at hand, opened it, and read Saint Paul's instruction to the Romans:

Not in riots and drunken parties, not in eroticism and indecencies, not in strife and rivalry, but put on the Lord Jesus Christ and make no provision for the flesh in lusts (Romans 13:13-14)

and his conversion was complete.

Augustine, who had written the treatise De Musica before his conversion, struggled mightily afterward to define an appropriate Christian response to the sensual pleasures that music confers. In Book 10 of Confessions, he writes with palpable anxiety of the urge to

[have] the melody of all the sweet songs with which David's Psalter is commonly sung . . . banished not only from my own ears, but from the Church's as well.

He was ultimately able to reconcile his love of music with the hatred of the memory of sin that it evoked by rationalizing that it was not the singing that moved him, but rather the content of what was sung. Indeed, he frequently refers to his own conversion using the language of music, and, specifically, of singing. In Book 9 of Confessions, for instance, he writes of the desire to praise God for granting him the gift of faith by singing a song (invoking Psalm 26) from the very depths of his being:

[Converts wish] to sing from the marrow of our bones, "My heart has said to you, I have sought your face, your face [O Lord] I will require.

And in his Commentary on Psalm 32, Augustine glosses that Psalm's famous opening verse:

The old song belongs to our old selves, the new song is proper to persons made new . . . Brothers, sing well.

The liturgical music performed at his baptism seem to have entered as deepy into Augustine's physical body as into his soul, inpiring the cleansing tears that reflect the ritual water of baptism itself. Augustine describes it in Book 9:

I wept at your hymns and canticles, moved deeply by the sweetly-sounding voices of your church. The voices flooded into my ears, trut seeped into my heart, and . . . tears streamed down, and to me it seemed they were good.

In 1838, Franz Liszt wrote to his friend Joseph-Louis d'Ortigue about Raphael's painting of Saint Cecilia in ecstasy surrounded by SS. Paul, John the Evangelist, Augustine, and Mary Magdalene (top; the second image is Botticelli's rendering of Augustine), which he had seen on a trip to Bologna. The painting impressed him deeply, and he interpreted it as an allegory of the artist's ability to perceive and propagate the divine truths revealed through the sort of heightened sense of hearing that had brought about Augustine's conversion itself. Liszt considered Cecilia, "that virgin, ecstatically transported above reality," to be the exemplar of the artist, who translates divine sounds in such a way that they can be understood by the masses, and he saw the three saints who flank her as representing varying degrees of comprehension of music. As he described Raphael's rendering of Augustine (second from right):

His face is serious and grieved . . . . Having waged a constant war against his senses, he is still fearful of the fleshly snares hidden in the appearance of a celestial vision . . . as one who had been seduced and transported far from God's way by the lure of paganism, he is asking himself . . . whether these harmonies that seeem to descend from heaven are not actually deceptive voices -- a contrivance of the devil, whose power he knows only too well.

May Saint Augustine intercede for us, that we may be given true hearing and be able to discern between the two.
Posted by Pentimento at 9:00 AM

Thank you, Craig - I'm glad you liked it.