The Voices That Have Gone, Part 8: By Their Fruits 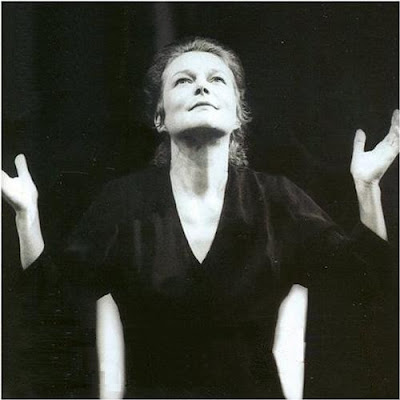 One day in early July of 2006, Soprannie and I were chatting by long-distance telephone. We both had newborn babies, and the huge energies that had been previously marshalled towards our singing were now being redirected. We spoke about that, and also about a recent recording of Handel arias by the remarkable mezzo-soprano Lorraine Hunt Lieberson (above). We found out later that she had died just a couple of hours before our phone conversation.

I was privileged to hear this luminous artist live on several memorable ocasions, including her legendary performance of Cantatas BWV 199 and 82 by J.S. Bach, controversially staged by Peter Sellars. Cantata 82, "Ich habe genug," usually performed by a bass soloist, is a gloss on Simeon's joyful utterance of recognition and desire for death at beholding Christ's Presentation in the Temple (Luke 2:29-32):

Lord, now lettest thou thy servant depart in peace, according to thy word:
For mine eyes have seen thy salvation,
Which thou hast prepared before the face of all people;
A light to lighten the Gentiles, and the glory of thy people Israel.

In the Sellars staging, Hunt Lieberson appeared on stage in a hospital gown, with a male dancer in black holding the only light source, a bare bulb on a wire, and moving it with her as she traversed the stage. The ends of her once-luxuriant chestnut-brown hair were gathered up in a rubber band, and she was without makeup. She sat cross-legged on the floor to sing the second-movement aria, "Schlummert ein, ihr matten Augen" (Sleep now, you weary eyes), and the voice that Peter Sellars has described as

filling the room and you don’t know where it’s coming from . . . going right to the heart of a suffering person, not to increase the suffering, but to heal it, to release it, to offer some kind of balm . . . shocking in its intensity, and then this incredible balm of compassion and tenderness, of generosity . . . is poured out . . . like a kind of liquid that is there to heal

seemed to well up out of complete stillness. Indeed, her stillness and near-nakedness were even more gripping if you knew that she had been battling breast cancer, the disease to which she would succumb five years later.

Lorraine Hunt had run off a few years earlier with the married composer Peter Lieberson, whom she met when she sang the role of Triraksha in his opera Ashoka's Dream at the Santa Fe Festival in 1997. They married after his divorce from his first wife, and she became, like him, a Tibetan Buddhist in the Shambhala lineage. My sister, a member of the same sect, who shared with Lorraine a spiritual director, told me that their teacher knew when Lorraine was dying, and called her on the phone in her final moments to offer instruction on crossing the bardo.

Even if one knew nothing of her life, one could tell from her singing that Lorraine Hunt Lieberson was an artist who had known deep suffering. This kind of artist, one who has crossed the path of suffering, is vitally important to our age. We need voices like hers to lead us to a recognition of our humanity in all its brokenness, and to give us the hope of heavenly consolation.

One can certainly argue against certain choices she made, and one can worry, and one can pray for the soul of this artist who the British blogger Pliable has called "one of the rare elect." But one might be consoled to recall Christ's words in Matthew 7:16, "By their fruits will you know them."

An excellent profile of Lorraine is here. And, if you want a taste of the infinite stillness -- and the bending of time -- that was a part of her art, go here. The song is "Unbewegte laue Luft" (Motionless warm air) from the op. 57 group of Lieder by Brahms (Brahms didn't really write song cycles per se, like Schubert and Schumann did, but there's some evidence that he intended the songs he wrote under the same opus number to be performed together). The poem is by Georg Friedrich Daumer, and here is my translation (though I suspect that my friend Otepoti could write a better one):

Motionless warm air,
Nature in deep repose.
Through the still garden at night
Only the plashing of the fountain is heard.
But in my heart there well up hot desires;
But in my veins there swells
Life, and the longing for life.
Should your breast not also
Heave with more passionate longing?
Should the cry of my soul
Not also echo deeply in yours?
Softly, on ethereal feet,
Do not delay to float down to me here!
Come, oh come, that we might
Give each other heavenly satiety!
Posted by Pentimento at 12:59 PM

My sensibilities have always been more or less intellectual. Art sometimes reaches in a slaps me around a bit, but your sensibilites are in another league. That's one of the reasons I like coming here.

I have always been troubled though about those people who clearly have chosen a bad path in important repsects, but seem such heros in other, less important respects. Maclin often talks about Bergman that way.

But then again, the line between good and bad goes through everyone of us.

I agree, it's a conundrum. Or a mystery. When I think of the composers I love, I don't even want to venture a guess as to the states of their souls. They were a pretty bad lot on a personal level. But then there's the gift of handling and transmitting sublime beauty that they had - does it mitigate the personal badness? Does it cancel it out?

Take a look at this clip of Lorraine Hunt Lieberson singing the role of Irene in Handel's opera Theodora, about the early Roman Christian martyrs. Peter Sellars updated the action, but Irene is a fervent voice of Christian belief and witness in both his and Handel's interpretation. It would be hard to be convinced otherwise about the artist herself in this moving performance. But then again, who knows? All I know is that Lorraine's gift gave many a glimpse of heavenly consolation, regardless of how she lived and died.

Thank you for the hat-tip :-D

I don't think I could do better!

Did you listen to "Unbewegte laue Luft"? It's the greatest song ever written.

Yes, I did , but not enough yet to get it under my skin.

Good heavens! The verification word is "unarse" - those monkeys have a low sense of humour.

Well, part of it is the evil Brahms. If you listen again, pay attention to the word-painting in the first two lines - the real motionlessness of the music, which is an illusion, because music must be about motion and about the passage of time, but Brahms makes time stand still and suspends motion.